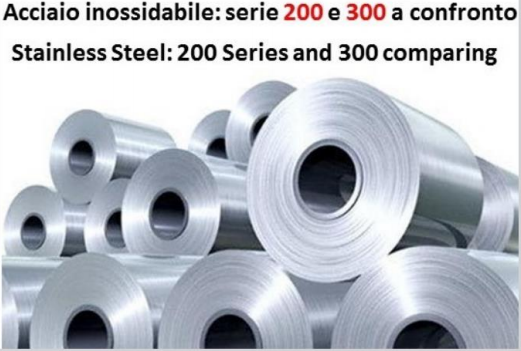 On more than one occasion over the last ten years, the instability in the price of nickel (Ni) has obliged some producers to look for an alternative for austenitic stainless steel production that has similar characteristics to that of AISI 304. At the beginning of the 30’s the first austenitic stainless steels with chrome (Cr) and Manganese (Mn) were produced. These added elements substituted the percentage of Ni present to allow the material to maintain its austenitic properties. The AISI Manual witnessed the appearance of the 201 and of the 202 (and from here on the name Series 200 was used to distinguish material from the Series 300 and 400 which is more commonly known as “stainless steel”).

The use of stainless steel from the 200 series has had great success in India where a good understanding of these materials was developed. In particular, after paying attention to the differences in performance in respect to the commonly known AISI 304 (EN 1.4301), specific non-dangerous applications in its interchangeability were made possible. However, that apart, in other countries the substitution of the 304 came about without strict control consequently creating enormous problems.

It can be said that the presence of poorly controlled S&C Standard materials belonging to the 200 Series will undoubtedly hide serious loop-holes, leading to damage to the end-user and damage to the Stainless-Steel market in general. At present, approximately 2 million tonnes of the so-called 200 Series are consumed in Asian countries. Some types are not covered by normative whilst on the other hand, others mirror the International Code or, at least, are produced by processes that guarantee adequate checks by S&C standards. In Table 1: An illustration of Stainless-Steel Series 200 chemical compositions. 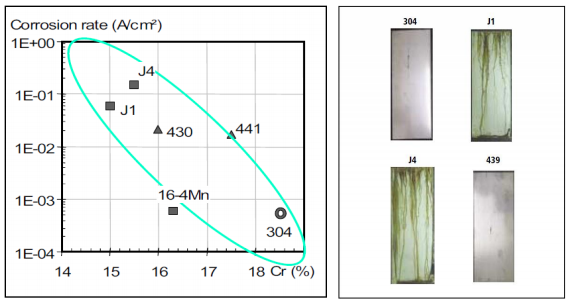 In-order to compare the Stainless-Steel Series 200 corrosion resistance with traditional types of Cr-Ni (e.g. AISI 304), various types of testing have been carried out. The Fig.1 represents data corresponding to voltage density registered on diverse v-types of stainless-steel. It must be said that Cr has a notable effect regarding corrosion resistance. In-particular we can see its resistance to “pitting”: A crucial element taken into consideration when evaluating the “use” of stainless-steel”. This is profoundly influenced by the quality of the chrome and sulphur and above all, the latter component which is responsible for “pitting”. The Fig. 2 clearly demonstrates this concept highlighting the clear difference in the materials composed by Cr-Mn in respect to the 304.

Similar conclusions can be reached observing the PH-levels in “depassivation” in Fig.3: Resistance to atmospheric corrosion which yet again reveals the vital difference in behaviour between the common 304 and the Cr-Mn types. The results are obvious regarding exposure to salt-spray testing in which the results are shown in Fig. 4: In relation to the characteristics in formability to cold; the tests have demonstrated a tendency in the formation of “Martensite”, particularly when the mechanical resistance is lowered causing a reduction in nitrogen and carbon. If this fact can generate an important difference, then certainly Stainless-Steels 200 series with Ni standard between 1% to 4% are rather susceptible to low temperatures after the deep-drawing process. (delayed cracking) (Fig.5).

The partial or almost total substitution of nickel with that of manganese (and nitrogen), allows the production of austenitic stainless-steel with much lower percentages of nickel. An 18% chrome composition is not compatible with low levels of nickel without the formation of ferrites and for that reason the quantity of chrome in the Stainless-Steel 200 series has been reduced to 15-16% and even 13%-14% in some cases. This, as a result renders their corrosion resistance non-comparable to that of 304 or types similar.

Furthermore, manganese and in some cases copper have undesirable effects too. The repassivation properties are in fact slowed down in acidic conditions typical in the corrosive areas under the dregs and in the cracks. The melting-speed of Cr-Mn steels in that condition is approximatey 10 to 100 times faster in respect to the 304. This factor becomes even more dangerous when the materials are produced in plants that do not control and check the levels of sulphur residue and percentage of carbon, thus resulting in the impossibility to track these hidden parameters. This fact has dire consequences on the recycling process where non-declaration of steel with Cr-Mn can become a dangerous mix of scrap that can generate castings that are rich in manganese. Stainless-steel series 200 Cr-Mn management and the themes that incorporate it are considered particularly important due to its overall delicacy in the stainless-steel market.

Furthermore, it must not be forgotten that annual stainless-steel consumption in Italy remains solidly collocated amongst the top positions both on a European and World level. Therefore, Italy can be considered a country that works and transforms large quantities of material in a sector where stainless-steel consumption is extremely varied and widely-spread through diverse sectors in the market in terms of both “finished products” and “sub-contracting”. The diversity of “Sistema Italia” or “Italian System” from its European and International counterparts has allowed natural evolution in the supply efficiency through diffused distribution systems to meet varied utilizer needs. Notwithstanding, market penetration has been rendered more problematic due to heavy increases in nickel prices. This in turn has led to the push of proposals of non-conventional stainless-steels like chrome-manganese (series 200) that in respect to the classic austenitic stainless-steels are cheaper and offer a more stable price alternative.

It is important to note at this point that these stainless-steels although austenitic are not confused or taken for series 300 that have different performance characteristics from a corrosion resistance perspective.