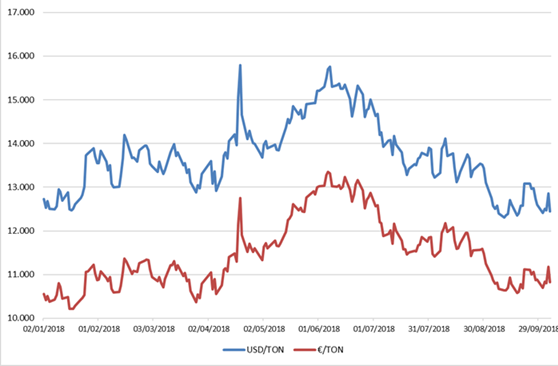 The graph shows that nickel price is now steady at a quotation in the range of €/ton 10,700-11,000.
Nickel, which unexpectedly was constant during the month of August (while in the past it often fell during the summer), began its decrease in September 2018 and then stabilized.
The maximum peak of over €/ton 13,300 was reached in the early days of June, and then fell to the current range, as mentioned above, between €/ton 10,700-11,000.
The extra-alloy value (of AISI 304) has jumped up to €/ton 1,661 (July 2018), and at the current quotations of the LME (London Metal Exchange) the forecast for November decreases to €/ton 1,420-1,430 (in October it was €/ton 1,462).
This reduction is also due to the fact that the FeCr fell for the fourth quarter to $/lb 1.24, and such decrease has already been included in the extra-alloy values forecast for November.</>

In the past, it was frequently reiterated that during May-September 2018 the market prices of stainless steel had not risen together with the increases of the extra-alloy values, due to the influence of the prices of extra EU materials. We definitely noted a rise in the first half of the year, but limited to €/mt 100-150 (AISI 304), a much more moderate share compared to the actual increase of the extra-alloy prices. Therefore, prices have risen moderately, but they have not received higher values of extra-alloy compared to those included in a range between 1400 and 1450.

With reference to Mori 2A price list, we would like to point out that nickel references of the end of September are very similar to those of January 2018; considering the months of April, May and June, the prices of raw materials have increased but we have decided to absorb everything without making changes to the price list for the second half of 2018.

At present, it is difficult to predict a rise in prices as well as a decrease (compared to the references of April, May, and June).

– Concentrated arrivals of materials from outside Europe are expected in October and November at already closed prices. On the other hand, since prices are closed, it is difficult to trigger further decreases. As mentioned above, no further purchases can be made shortly.
– In the event of a sharp fall in nickel quotation, which could lead to further reductions in extra-alloy values, the finished price may not fall to the same extent, because the steel mills could raise the base prices, bringing them back to historically more significant values.

We will certainly provide more reliable price data for the first half of 2019 during the month of December.